Last week I bought a set of these instant flower nozzles from Iced Jems.   A friend mentioned them to me  (thanks, Hot Chop Threads!) and as soon as I saw them, they jumped to the top of my ‘must -have-list’. 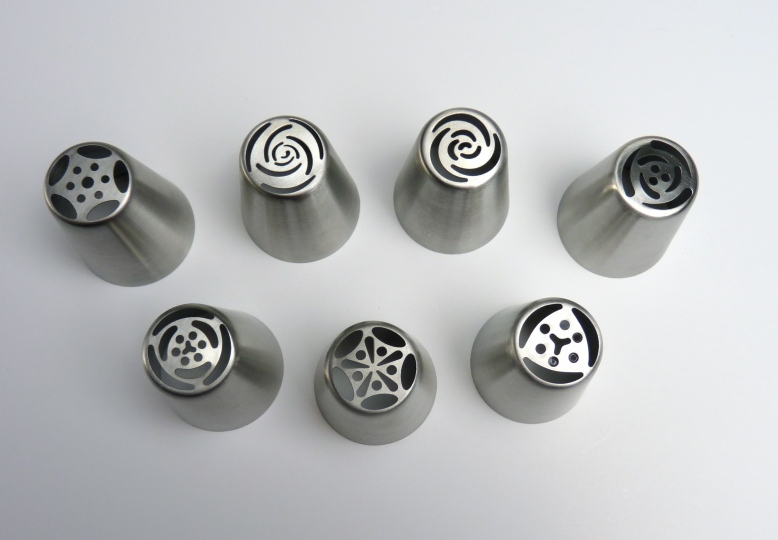 Often the nozzles are mentioned elsewhere as Russian flower nozzles (because they come from Moscow, apparently) and this set from Iced Jems is a selection of the many Russian flower nozzle designs available.   These seven nozzles provide a good selection and I am not sure that you would miss the others as they are really a variation on a theme.

The nozzles promise the ability to quickly pipe intricate buttercream flowers on your cupcakes.  Could it really be so easy?   Only one way to find out – bake some cakes, make some buttercream (I used American buttercream here) and get piping!

My set includes two rose bud nozzles  – this one and the other similar nozzle that produces finer petals. 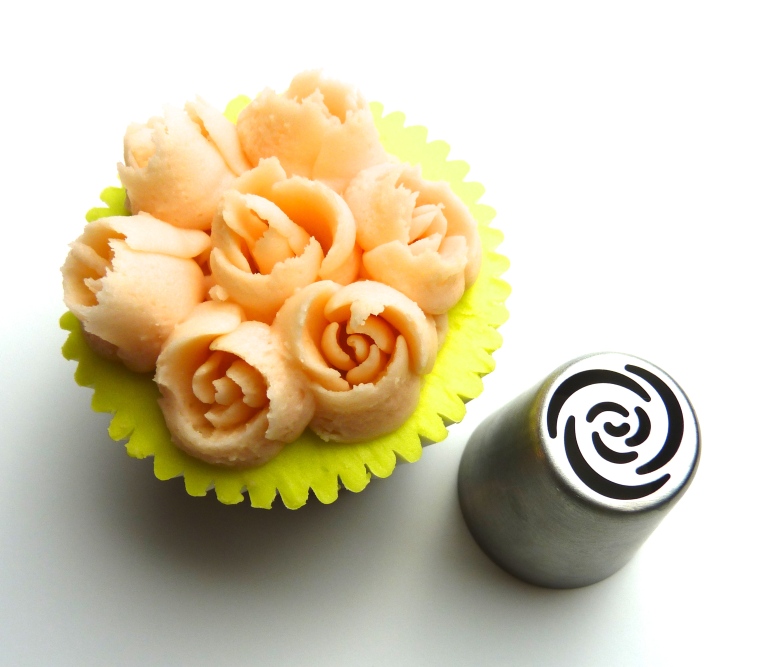 The other five nozzles in the set produce variations of tulip flowers like these.  Don’t you love those little stamens? 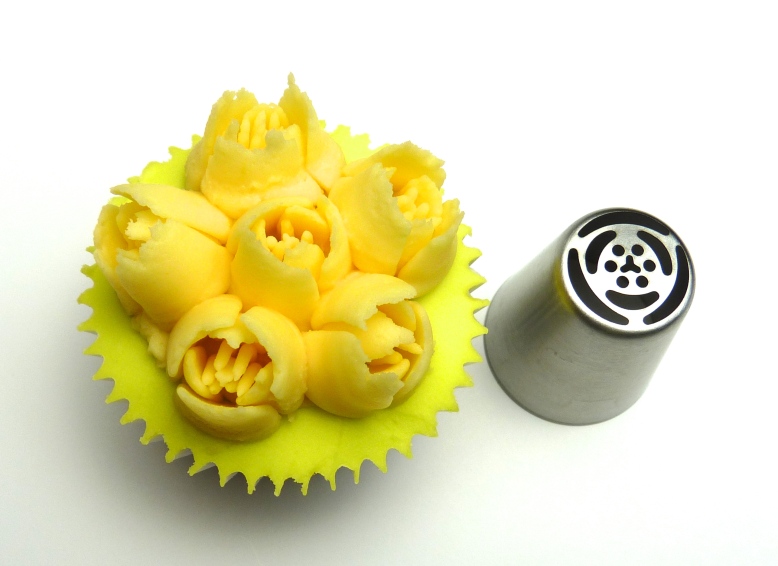 So what did I think?

Well, I love the nozzles and they quickly turn any cupcake into a beautiful posy of flowers.    More creative effects are possible by adding piped leaves, using multiple colours of buttercream in the piping bag to give a striped effect, or using the rose bud nozzle as the starter for a larger rose.  Something for me to try on another day.

I did find the nozzles took a bit of practice to get the flowers to form properly without sections breaking or worse, not adhering to the cupcake at all, or looking more like a blob than a flower.

To get the flowers to stick to the cupcake, I found that it helped if I spread a little fresh buttercream on the cupcake just before piping so the flower had something to stick to.   And wiping the nozzle tip between each flower helped ensure each flower piped cleanly.   The consistency of the buttercream was absolutely critical to success.  It has to be fairly stiff to form the intricate flower.  Once the buttercream warmed up from the heat of hands, I found I piped blobs rather than flowers.  Easily fixed by popping the piping bag in the fridge for a minute or two to cool down.  Timing was important here as you can’t let the buttercream get too hard.

Now off to make more buttercream and give those other nozzles a try.

Advertisement
October 8, 2014June 1, 20152 Comments
Congratulations to Fabric HQ who celebrated their third birthday last week.  To wish them happy birthday, I made this lovely bouquet of flowers for the Sewcial last night. 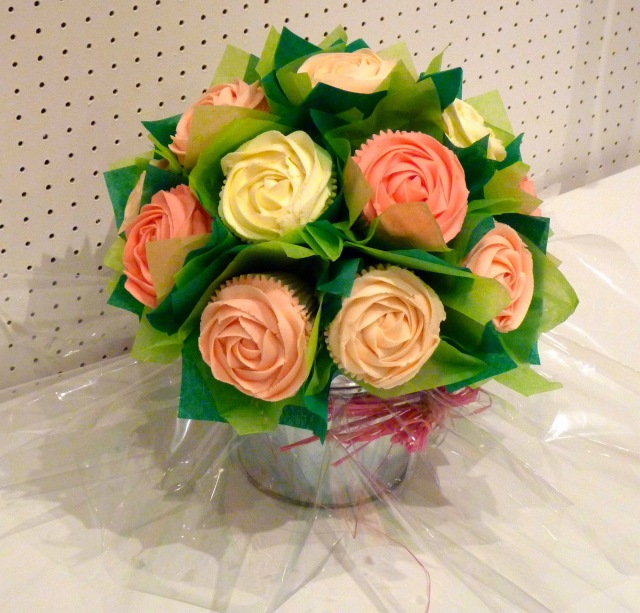 To make the bouquet, roses – in white or graduated pink tones of buttercream – were piped on vanilla cupcakes using a 2D nozzle.  The roses were then attached to a foam ball (not as easy as it might look! but fortunately I had a fantastic teacher – the lovely Natalie from Faircake, London), creating a pretty ombre effect to the arrangement.

Beautiful to look at, the roses have a gorgeous vanilla scent and are delicious to eat.  I think a cupcake bouquet makes the perfect birthday present.  Happy birthday Fabric HQ and wishing you many more.
September 24, 2014June 1, 20153 Comments
It was the Sewcial again last night.  The first one in the new Fabric HQ shop and Make HQ studio.  After all their cutting, stitching and sewing, the ladies deserved a treat. 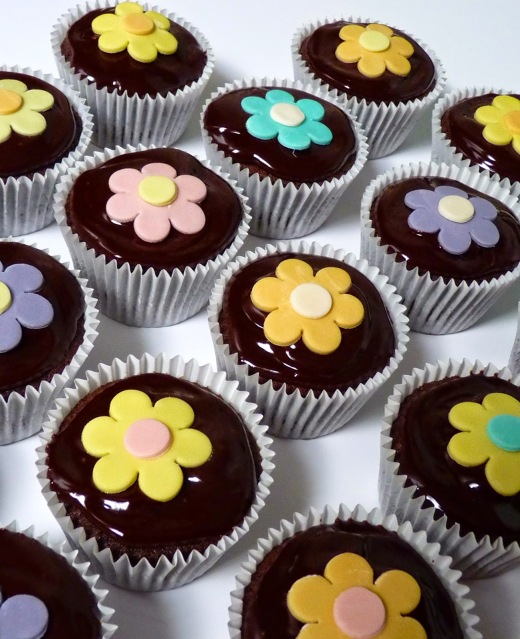 Cakes and sewing just seem to go together, well, to my mind anyway.  Rae and Jacqui from Fabric HQ very kindly let me make some cakes for the Sewcial last night.

Here’s what was on offer.  Lovely marshmallow flowers in gorgeous colours of yellow, pink and green.   They are rather a labour of love but very tasty. 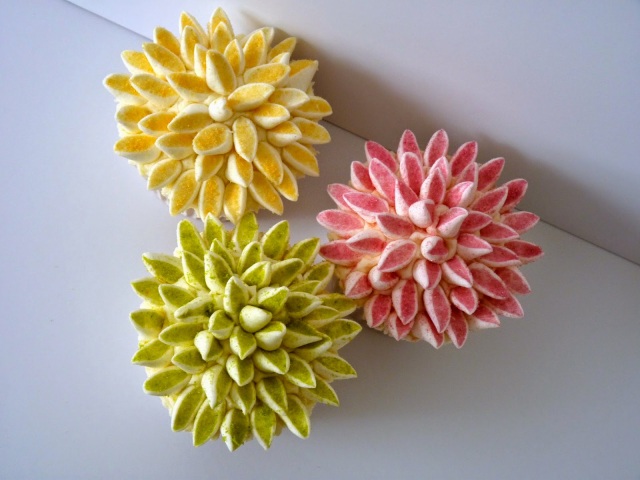 And these pretty little floral creations that were deemed almost (almost!) too beautiful to eat.  Not that that saved them in the end, the scent of vanilla being too much to resist. 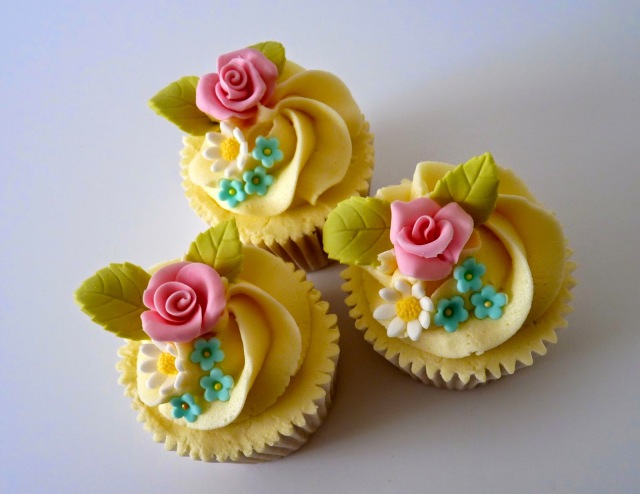 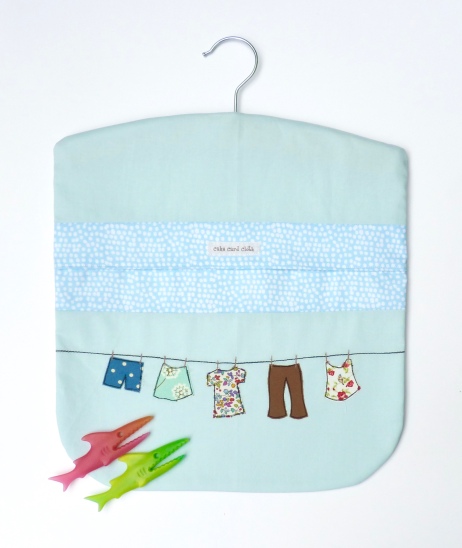 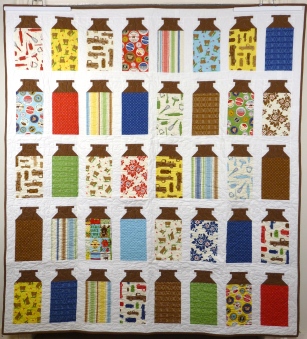 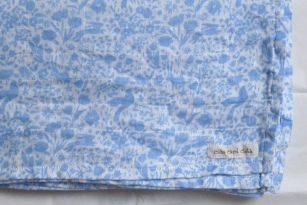 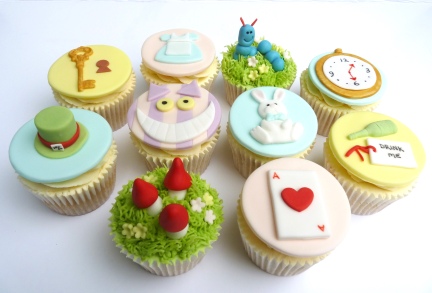 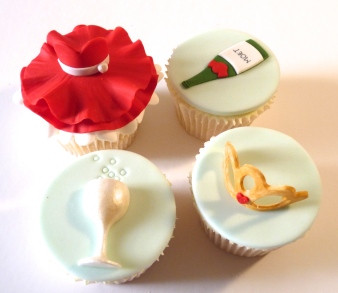